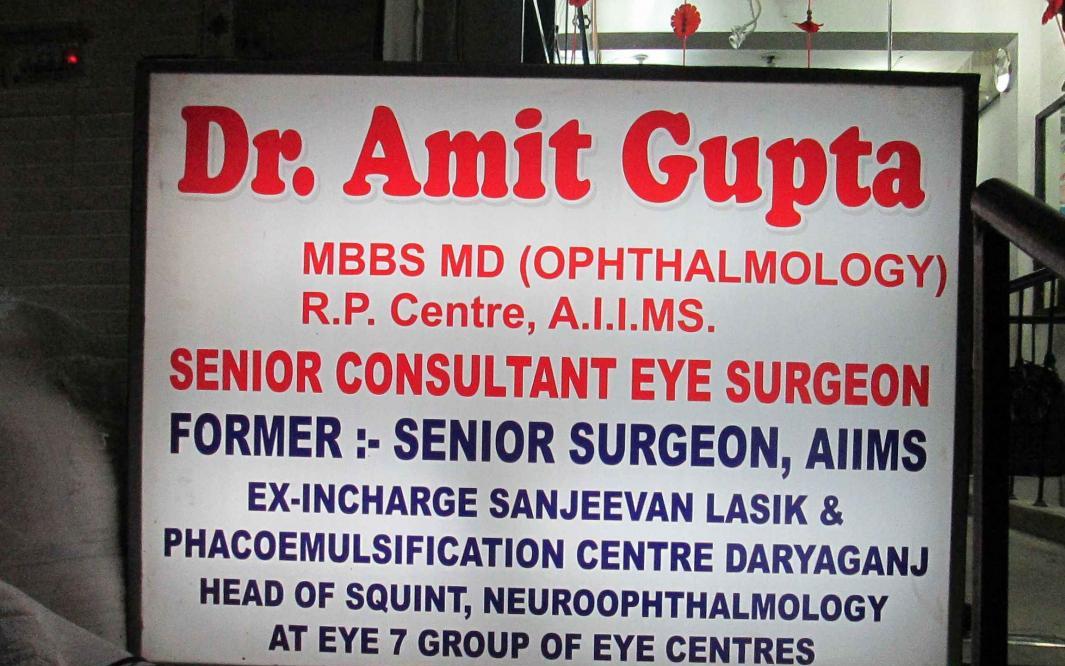 Dr. Amit Gupta is a Senior Ophthalmologist based in New Delhi, currently designated as Director at the Friends Eye and Child Care Centre in Noida and Delhi. He is also in charge of the Squint Clinic at Eye 7 (Chaudhary Eye Centre) in Daryaganj, New Delhi. Earlier, he was in charge of the Sanjeevan Lasik Centre, Daryaganj, from 1997 to 2003. A post-graduate in Ophthalmology from the RP Centre at AIIMS New Delhi (1983 batch), Dr. Gupta is very well-versed with all aspects of Ophthalmology, specializing in squint, neuro ophthalmology, and pediatric ophthalmology. After his post-graduation, Dr. Gupta worked as officer In-charge of Casualty and National Eye Bank, at the RP Centre of AIIMS from Feb-May 1994. In May 1994, he was posted as a Senior Resident in the center's unit of strabismology and neuro ophthalmology for a period of three years. In addition to this, he has worked with stalwarts such as Professor Prem Prakash, Founder President of Strabismological Society of India. He has been trained in phacoemulsification procedures under the expert guidance of Dr. RB Vaypayee, Additional Professor, RP Centre. He is also familiar with all other ophthalmic surgeries such as IOL implantations, glaucoma surgeries, keratoplasties, lid and vitreous surgeries. Besides, he has independently performed OPD investigations/procedures such as ocular ultrasound fluorescein angiography, laser (Argon laser, YAG laser, Diode laser). Recognized as a pioneer of Lasik surgery in Delhi, Dr. Gupta has performed over 10,000 LASIK surgeries to date. He has been doing cataract surgery using phacoemulsification (with implantation of foldable IOL) since 1998. Dr. Amit Gupta has been a regular invitee as faculty in Lasik and Squint sessions of the Delhi Ophthalmological Society. Besides his clinical commitments, he has had several of his research-based papers published in peer-reviewed journals and presented at various conferences. He has also contributed towards community care, having participated in organizing and conducting four eye camps in Haryana and Uttar Pradesh, where he was one of a team of four surgeons that performed approximately 150 cataract operations per camp.